Yesterday was rough. I binged and purged twice instead of following my meal plan. Then, this morning, the scale said I had gained 6 pounds since yesterday morning. Ugh! I can’t even deal today. I don’t know whether or not I’m going to try to follow my meal plan today. I want to fast so I can lost that weight I gained binging yesterday. But I also know that if I don’t try then I won’t be working toward recovery, which is what I ultimately want, even if it doesn’t feel like I want it right now. I don’t know. I’m just overwhelmed and exhausted.

I didn’t eat breakfast or snack today. I left the house without shoes. I came home from treatment and binged and purged multiple times.

I left treatment last night. Now I feel lost and sad and overwhelmed and unsure what direction I want to go. I’m making breakfast, but I don’t know if I’ll do 3 meals and 3 snacks. I kind of really want to restrict. 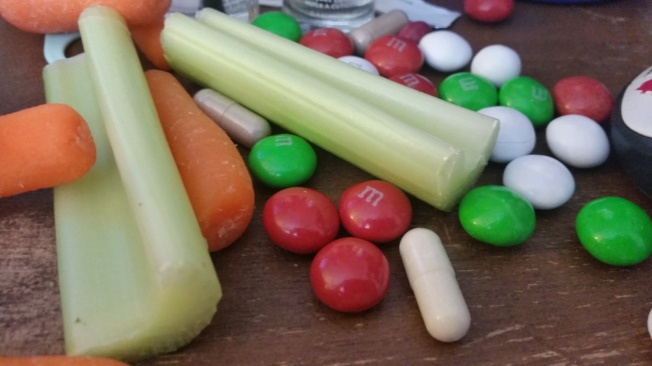 This pretty much says it all.

I love the suspicion in her eyes.

While surfing the interwebs, I came across a post on an eating disorder “support” forum asking what people had binged on today.

Normally, this wouldn’t interest me because I don’t really care what other people have eaten, it just makes me feel guilty for what I have consumed. However, some of them made me cringe.

“a apple and a can of diet soda”
(Why are you even including the diet soda?)

“4 walnuts, 1 teaspoon of peanut butter, 2 carrots, 1 anchovy, and I looked at a piece of cake the wrong way”
(I may have added that last one.)

Oh, my dear Ana friends, I get it. I’ve been there. I remember when eating a cup of oatmeal felt like a binge. But a binge it is not.

Try 6 cups of rice (with butter), a large pizza, 2 liters of pizza, a hamburger, a huge batch of fries (with fry sauce), a whole jar of peanut butter, a pot of pasta, a whole batch of soup, do I need to continue?

Now granted, most days are not that bad. But when I binge and purge, I binge. If I don’t, I just purge. Eating a normal meal and purging feels like binging because normalcy terrifies me. But again, that doesn’t make it a binge.

I’m sure it would annoy an anorexic person if I was like, “I totally restricted today! I only ate 2500 calories!,” it bothers me when people say they binged when they are actually restricting.

I realize this probably makes me a petty person. Oh well.

I was too distraught last night to post. Yesterday was long and hard. I followed my meal plan yesterday before going in. I got soooo sick on the bus ride.

Yesterday morning, I sent my counselor an email of some of my journal entries that I had planned to show her on Monday, except we got busy talking about other things.

She pulled me aside last night to talk about them because she was concerned, then made me agree to a safety contract.

She’s more determined than ever that I should be in the partial hospitalization program. She also wants me to stay in their dorm for extra support.

Today, I was having a really hard time following my meal plan. I just was hating food and hating my meal plan and hating life. I managed to eat what I had agreed with my nutritionist to eat, and keep it down, but I hated myself all the more for it.

I had very little motivation to go to treatment today, but my dad offered me a ride (meaning no nauseating bus ride) and I allowed him to take me.

When I arrived, I had a random weight check (weights are normally on Monday) and I pretty much freaked out internally.

At dinner, all I could think about was my weight and the weigh in and I couldn’t eat dinner. I had to boost. I drank it during art therapy.

Groups were ok tonight. I got to process some stuff in art therapy, then we had friends and family groups where support people come in and learn stuff.

I’m afraid of being kicked out of the program for non-compliance. My third week is almost over and I’m still not finishing dinner most nights and restricting during the day and binging and purging at night. I feel like I haven’t made any progress. But I also feel like treatment is my one lifeline at the moment and that if I can’t continue, if I get kicked out (whether for my behavior or insurance) before I make so much more progress, I will have no choice but to go back to my eating disorder fully because I feel so out of control and overwhelmed all the time that I feel like if I don’t have treatment and don’t have my eating disorder, I won’t make it.

Tomorrow is the last day I’ve been approved for so far. Hopefully I don’t have to wait the entire weekend to find out the results this time. Hopefully I hear tomorrow or Friday. Hopefully they approve php, because I feel like something needs to give, and that might be the thing to help it happen.

I feel so much turmoil. So much conflict. I feel tired. Exhausted. At the end of my rope.

All through treatment tonight I kept wondering to myself if I really want to recover.

I don’t have an answer.

I keep wondering what is the problem with having an eating disorder, really?

Does it really matter whether I ate 25% or 30%?Not in the grand scheme of things.

I refused to boost. I walked out of the dining room angry and frustrated.

The rest of the night was long, boring, and filled with me wondering why I was there.

Do I really want this?

This picture sums up how I feel after I eat and don’t purge.

I had a migraine today and it just would not go away no matter what I did. When I went to treatment tonight, I could only finish 15% of my dinner because I was so nauseous, so I had to boost. Luckily, I was allowed to sip it slowly during group.

It’s pretty bad, but not as bad as it was made out to be.

I did notice that after getting some nutrition down, my migraine did start to lesson.

I explained that I haven’t tried following my meal plan at all so far because having to go and eat dinner and a snack and keep them down has been overwhelming enough and I couldn’t even think about trying to keep down anything else.

They suggested that for this weekend, I just focus on trying to eat and keep down one meal a day. So, after I got home, I sat down with my mom and she helped me plan some dinners. I don’t know what order I’ll eat them in, but here’s what I planned out for this weekend. They sound absolutely huge to me, but according to the handouts I got, this is what I’m supposed to eat.

For dinners, I’m supposed to have 2 starches, 3 proteins, 2 fats, 1 fruit, and 1 non-starchy vegetable.

Meal #1:
Hamburger bun, boca burger with a slice of cheese, a side salad with dressing, and a fruit that has yet to be decided.

My motivation to actually follow through on this is only so-so.

Tonight for first group we had DBT. It was really good information but, of course, I ended up crying again. I hate that.

Now to try to do things all on my own for the weekend.

I’m going to my brothers’ place tomorrow afternoon and will probably be there through Sunday afternoon. I’m going to take my own meals all pre-portioned and planned out and hopefully that will make it easier.

We got homework tonight to work on over the weekend. I’ll need to find some time to do that this weekend between games.