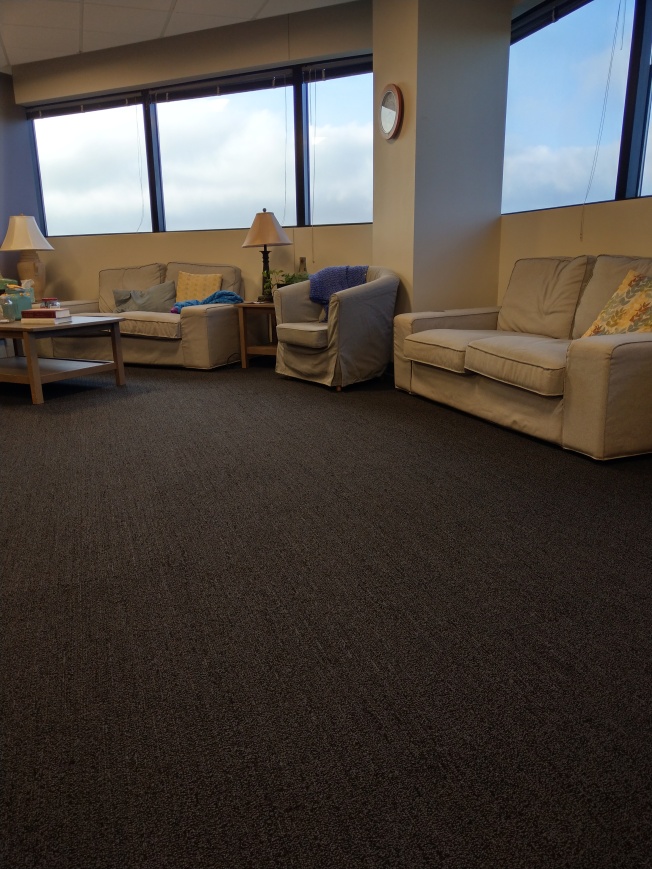 Here’s a picture of the common area (or as they call it, the milieu area) of my treatment center. Today is just another day in treatment. Today I will meet with my primary therapist, my psychiatrist, and my nutritionist, as well as have several skills and educational groups. I’ll eat all my meals and snacks there except my evening snack, which I’ll eat at home. Today I’ll move one step closer to recovery. To doing this on my own. It’s overwhelming at times, but it’s necessary.

It’s been almost a year since I posted last. I was in school, doing my pre-reqs for nursing during most of that time. That ended mid-September. I had been deep in my eating disorder for several months and my outpatient team decided they couldn’t treat me anymore, I needed a higher level of care. By the time I went to get my medical clearance for treatment, I was severely dehydrated, anemic, had low potassium, had a Mallory Weiss tear, and my liver and kidneys were starting to fail.

Until I received the news from my medical clearance, I had thought I was impervious to complications from my eating disorder. Yes, I’ve had chronic low potassium and anemia, but I thought that was the extent to which I would be affected. To hear that my liver and kidneys were failing was a cold splash of water on my face, a cruel wakeup call.

I admitted to a local partial hospitalization program on October 4th. It’s a 7-day-a-week, 10-hour-a-day program. It’s intense and challenging. I’ve been in it for 8 weeks now and I’m making progress. Before going back to treatment I was purging up to 26 times a day. Now I’ve gone 2 weeks without purging. I will probably move to their intensive outpatient program in a couple weeks. That starts out at 7 days a week from 10-3:30, then 5 days a week, then finally 3 days. I’m both looking forward to and nervous to transition. I know slips are a normal part of recovery, but I’m so scared of falling back into my old habits. I really want recovery to stick this time.

I would write more but it’s almost 2am and I have to be up in about 4 hours so I will try to sleep now.

Thank you for reading this and I hope you have a great day.