I haven’t posted in a while because I’ve been super busy.

What have I been doing, you ask? Well, I’ve been studying for another Praxis exam. I took that on Thursday afternoon…and I passed! I’m so relieved.

I’ve also been working! A lot!

Remember when I mentioned that I had exciting news coming in a couple weeks? Well, it’s time!

I’ve been selling Jamberry! I’ve been anxiously awaiting having the money to get started because I fell in love with these wraps during a friend’s party. I’ve been selling them this week and it’s been going really well. I love this business, this product, and getting paid to have beautiful nails and host parties. This is right up my alley! Join me in my excitement! (I’m going to shamelessly plug my business now.) 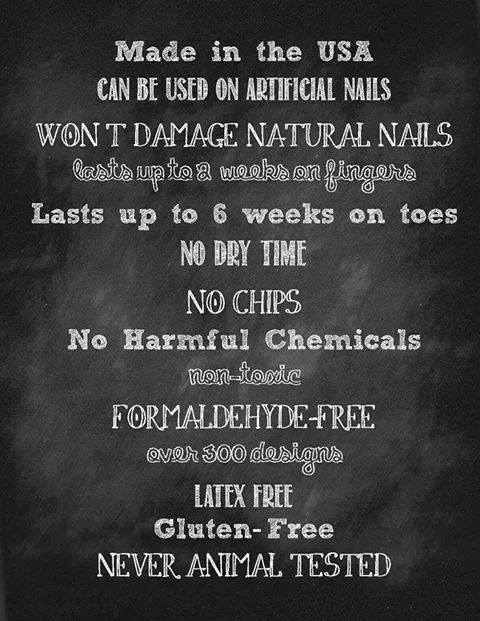 What is Jamberry?
Well, let me tell you!
Jamberry wraps are high quality vinyl wraps for your fingernails and toenails. They are easy to apply, durable, and beautiful.

Normally, I’m very hard on my nail. I love to paint my nails and have them look nice, but I can spend so much time on painting and decorating them, only to have them chip an peal the next day, even with base and top coat. However, when I wear my Jamberry wraps, they last! I wore my last wraps for 16 days and they still looked great! I only took them off because I wanted to change things up!

What does a sheet of nail wraps get you? One sheet gets you at least 2 manicures and 2 pedicures. The wraps last up to 2 weeks on hands and up to 4-6 weeks on toes and are incredibly durable! That’s $3.75 apiece. And if you do the buy 3 get 1 free deal it’s only $11.25 per sheet and $2.81 per manicure or pedicure!! How much does a quality manicure or pedicure cost you at a salon?

I can also make custom wraps! Here are some that people asked me for this week. 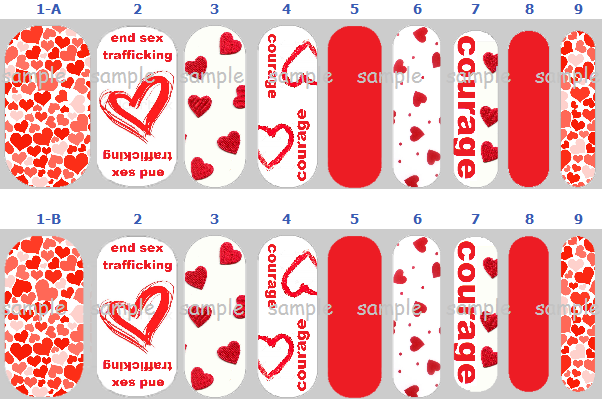 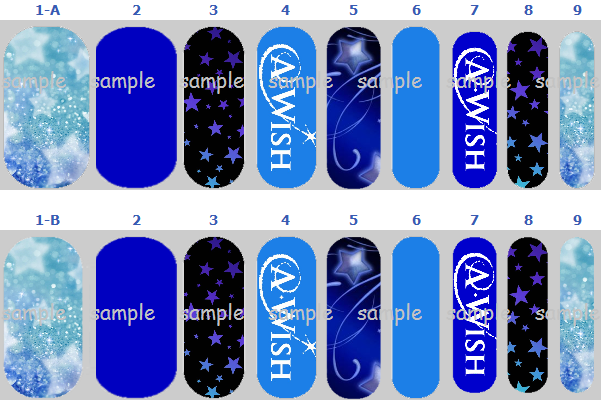 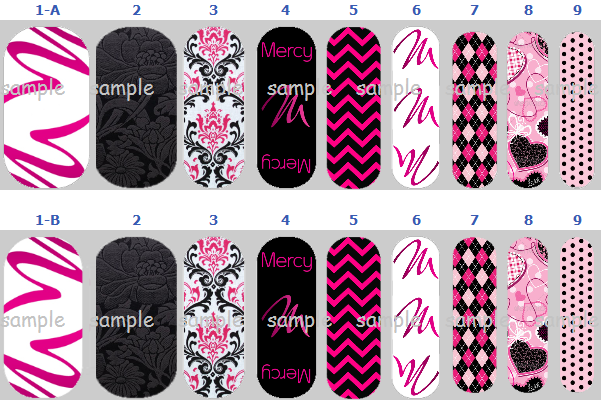 Most awkward reunion ever!

Last night was the reunion of the people I was in treatment with earlier this year.

We were all both excited and incredibly nervous. When people started to arrive, there was a period of awkward conversation mingled with equally awkward silence, and a lot of sizing each other up and comparing.

The lady who was hosting it at her home initiated it, and then we all felt obligated. You could feel the tension in the air as we each, for the first time in many months, ate around each other. And unlike when we were in treatment, we weren’t all required to eat certain foods or portions, so there was that extra fear of judgment. It’s one thing to eat around other disordered people when your meals are dictated. It’s another entirely when you are in control of your food choices.

Most of the women did a great job at picking a variety of foods and getting balanced plates. A couple, like myself, got only fruits and veggies. I simply could not bring myself to get anything else. I went into panic mode as soon as people started getting food and I wanted to leave.

I stuck it out, and in the end, I’m glad I did. After the initial awkward, we all settled in and began to feel comfortable with each other again.Before long, conversation was flowing freely and naturally, intermixed with joking, memories, and funny stories.

Toward the end, I was reading the question on the card when it wanted to know which movie the following quote is from: “I’m just one stomach flu away from my goal weight.” It was hilarious given the context in which we were playing the game.

We decided to get together again next month.

Earlier, I tried to eat an apple.

I can’t eat apples whole. When I was a teen, I had braces and if I tried biting off of the whole apple, my brackets popped off, so I started cutting my apples into slices. I had braces for a couple years, so this was years of having to cut my apples.

My disordered brain latched on to this, and I haven’t been able to eat an un-cut apple since.

Well, earlier, I went out to get the one piece of food in the house that belongs to me: one apple. However, my youngest brother was sleeping on the sofa (a story for another post) and has to be up early for work so I was trying very hard not to make noise. Our cupboards have latches on them and will NOT open or close quietly, so I wasn’t able to get anything to cut it with.

I went back to my room and tried a couple bites, but I just couldn’t do it.

A while later, I decided to eat some crackers. However, I was feeling really guilty about it before I even started, so I decided to make a cut on my arm for each cracker I ate.

I know, I know, I am not brilliant. M

Anyway, this was going along fine until the 13th crackers. Then, I accidentally cut too deeply.

I sat there in shock for a couple seconds. The unexpected pain and seeing my skin hanging open put me into a momentary state of confusion.

After coming back to reality, I recognized that I needed to do something about my arm. I quickly grabbed some toilet paper and pressed it firmly on the cut for a while to slow the bleeding.

After a while, I removed the tissue to check the cut. I got this terrible, sick feeling in my stomach when I saw my skin just hanging open. I pushed the cut closed and it just fell open again.

At seeing this, I knew I probably should go get stitches, but that wasn’t happening. I decided to just dress it carefully. I pulled out my Hypafix tape (best stuff ever) and I bandaged my arm, being sure to make sure my skin was tightly pulled together at the cut. I wrapped up the rest of my arm to cover the other cuts, then cleaned up all the signs of anything happening.

Now, I’m a little dizzy and very nauseous, but my arm doesn’t hurt. It will, that’s for sure, but right now it’s fine.

While I was dressing the cut, I asked myself whether those crackers were worth it.

The answer is most definitely “no”.

A true bulimic’s restaurant. Then, bulimics can spend their WHOLE life at the toilet.

The girls (women) I was in treatment with earlier this year are planning a reunion at the end of the month. They want me to come. I don’t want to. I was already the largest, and now I’m sure I’m rven larger. I want to see everyone, but I don’t want to be seen.

Wherr do I buy this??

I love the flavor text on this card. (The last sentence, that’s in italics.)

Someone I was in residential with four years ago is in the hospital right now with a feeding tube.

I know it’s stupid and petty and wrong, but I am jealous.

I miss my anorexic days. I miss fasting and  restricting and not binging and purging. I keep telling myself I’m going to stop eating altogether, this is one of my greatest wishes, but I can’t seem to follow through.

I love the idea of never again placing food in my mouth. The idea of total abstinence from food. It calls to me. I find it alluring. And yet, I cannot attain.

I hate myself for my own weakness.

I loathe myself for my inability to refuse.

I revile the food I find within me.

Pass out from exhaustion.

It is never enough.

I am never enough.

I will never be enough unless I can cease to consume.

I will find the answer. I swear it to myself. It may take months or years, but I will do it. I will discover the secret to existing without food. I will find the strength to abstain.

I will conquer my body’s misguided need for sustenance.

I found this neat site called Eat This Much. You can tell it how many calories you want to eat over how many total meals during the day, and it will give you a meal plan for the day. You can edit what types of foods it will suggest, follow certain diets like vegetarian, paleo, etc, tell it how many (or what percentage) carbs, fats, and proteins you want, and more. It’s really quite a useful site.

There’s only one small problem. 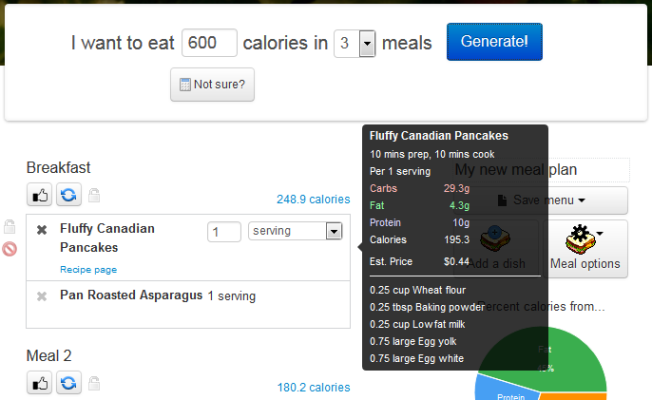 How do I get three-quarters of the egg white and the yolk? I’m also not sure how to measure a quarter of a tablespoon. 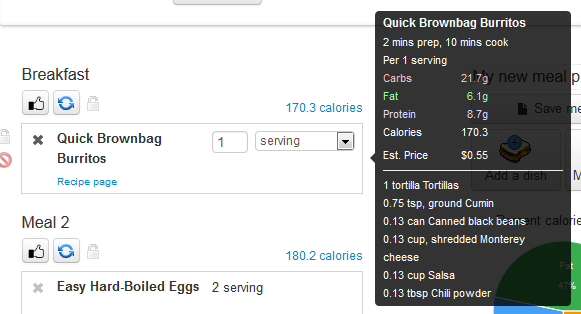 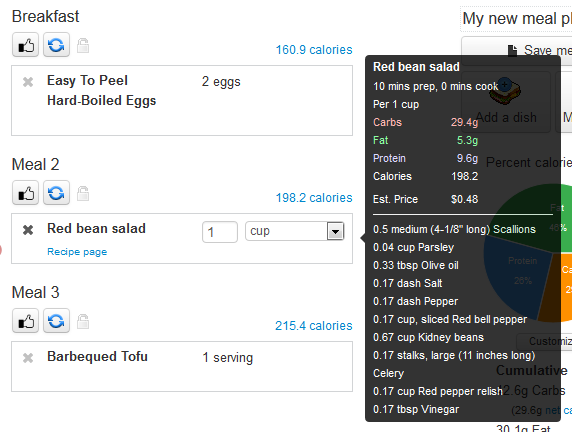 I love this site in theory. I really want to be able to use it. However, I can’t find a way to make it give me measurements that make logic.

I thought the strange measurements might have been just because I was requesting an unrealistic amount of calories per day. However, when I switched to the standard 2000 calories, it didn’t help any. 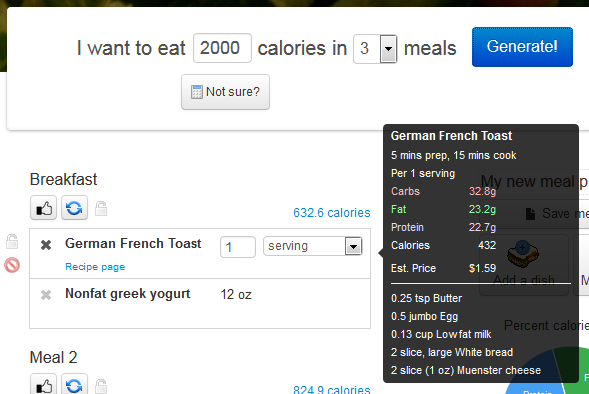 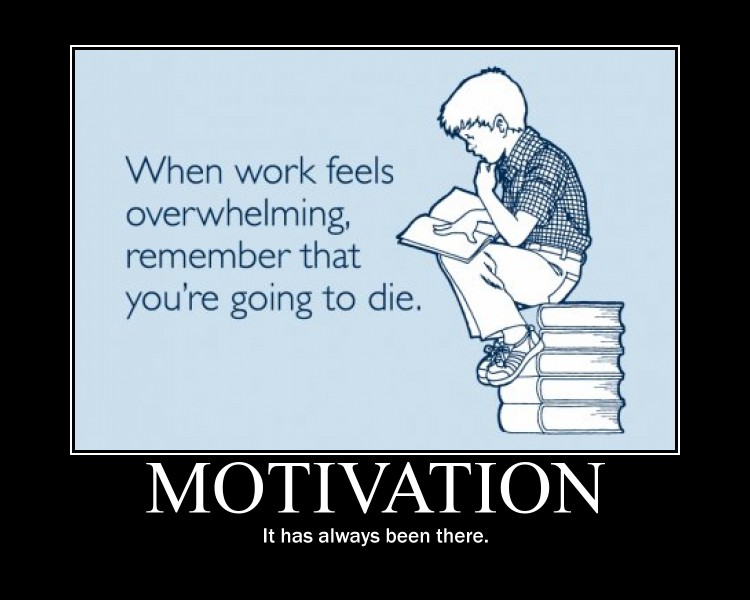 I was thinking this morning about checking out a local eating disorder support group, but then I began to wonder why I wanted to go. Was it because I want to work toward recovery again?

I think my true motivation was that I feel so disconnected and isolated right now that I just wanted to connect with someone, in person, who gets it.

Then I wondered whether it was appropriate to attend a recovery-themed support group if you don’t actually want to recover.

I don’t know the answer to that.

I considered this morning pursuing treatment again. Again, though, not because I wanted to recover. I miss the community feel of being in treatment. I miss the bubble of being consistently around others who understand what it’s like, who laugh at my morbid, ED-related jokes, who can relate to the fears and irrational thoughts.

Part of me feels guilty that I don’t want to recover because I feel like I’m “supposed to” recover. Like it’s the morally right thing to do, abd therefore I am morally wrong for not doing it. Not even that my actions are wrong, but that I myself am wrong.

Anyway, I should wrap this up. I’m in the chair at the dentist’s office and I want to publish this before he comes in.